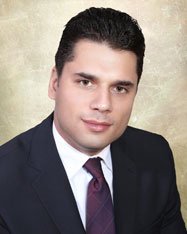 Igor Litvak is a criminal defense attorney located in Brooklyn, New York. He represents clients in local, state, and federal courts and has acted as lead counsel and co-counsel in some of the biggest, high-profile cases in the United States. He has worked extensively, defending clients in matters involving cybercrime, white-collar crime, organized crime, sex offenses, major drug conspiracies, domestic violence, terrorism, bank robbery, homicide, and many more. Many of his cases have been headline news and Mr. Litvak has been featured in the media.

Mr. Litvak earned his L.L.M in Trial Advocacy from Temple University’s Beasley School of Law in Philadelphia, Pennsylvania, and his J.D. from Rutgers School of Law in Newark, New Jersey. In addition, Mr. Litvak has Bachelor’s Degree in Business Administration in Marketing Management and Political Science from Baruch University, Zicklin School of Business in Manhattan, New York. During the L.L.M. Trial Advocacy program at Temple Law, which is the second-ranked trial advocacy program in the country, Mr. Litvak perfected his jury trial advocacy skills by taking advance rules of evidence courses and by conducting multiple jury trials throughout the academic year. While in Rutgers Law Mr. Litvak was the senior editor of Rutgers Computer and Technology Law Journal, President of the Jewish Law Student Association, 1L representative for the Student Bar Association, and a recipient of the Eric R. Neisser Pro Bono Service Program Certificate.

Upon completion of his first year of law school, Mr. Litvak got his first taste of “law work” after being hired as an intern at the Elizabeth Law Department of Elizabeth, New Jersey. The following year Mr. Litvak interned at the New Jersey Attorney General’s Office where he helped investigate large-scale medical fraud cases. In addition, he was a law clerk for the Honorable Irene Jones, an administrative law judge with the New Jersey Office of Administrative Law, and a clinical law student at the Community Law Clinic of Rutgers University, where he worked on several large corporate projects.

To round out his education, Mr. Litvak participated in a number of extracurricular activities. One of the most notable is the Baker Trail Competition at Rutgers School of Law where had the opportunity to act as counsel for the plaintiff and the defendant, which gave him an invaluable perspective on both sides even before graduating from law school. After graduation from law school, he accepted a position as a junior associate with the Portela Law Firm, a reputable criminal defense law firm located in Manhattan, New York.

In the Fall of 2013, Mr. Litvak opened The Litvak Law Firm and his work launched him into the spotlight. He has worked as lead counsel or co-counsel on several very big, high-profile cases that have made major headlines around the world. Mr. Litvak has been featured in news stories, in both print and video. The work he has done on high-profile cases has garnered him a great deal of media attention as well as the respect of his peers.

Mr. Litvak lives in Brooklyn, New York. He was born in Vorkuta, Russian Federation, a small city located north of the Arctic Circle, and lived there until he came to the United States at the age of 14 – he speaks fluent Russian. Since he was quite young, he had a strong sense of justice and a desire to advocate for others, so becoming an attorney was a natural, lifelong dream.