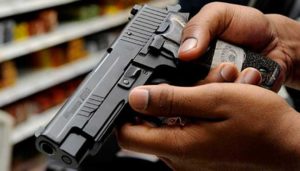 In New York, guns and weapons charges are some of the most serious offenses. When it comes to criminal possession of a weapon, the law doesn’t play around. The state does not recognize out-of-state permits, so even those who are simply visiting or on vacation could find themselves facing charges if they bring their gun along. If it’s loaded, that’s a minimum sentence of 3½ years in prison – and that’s without a criminal record.

If you are facing a gun or weapon charge, you need experienced legal representation fast. The laws are tough, so you want to find a top gun defense lawyer sooner rather than later who can navigate the complex court system and ensure that your rights are protected. You need someone who has the experience and knowledge necessary for these types of charges, and who will be responsive and attentive to you. You need the gun license lawyer in Brooklyn, from The Litvak Law Firm, in your corner.

Igor Litvak has the skill and experience necessary to defend his clients facing guns and weapons charges. A knowledgeable gun law lawyer, he is dedicated and determined, working hard to reach the best possible outcome for his clients, but he is also honest and compassionate. He understands the uncertainty and anxiety that come with an arrest and possible prison time. This drives him to work hard for the people he represents. Some of Mr. Litvak’s more notable guns and weapons cases include:

A notable federal case involving multiple armed bank robberies in Manhattan, after a vigorous defense the government dropped the weapon possession charge allowing the client to only serve weekends in jail after taking a plea.

Assault and criminal possession of a weapon in the fourth-degree involving a New York TLC driver. The case was resolved with a non-criminal disposition allowing the client to return to work.

The People of the State of New York v Antoine – Brooklyn, New York – Lead Counsel for Pre-Trial and Co-Counsel for Trial

Attempted murder and criminal possession of a gun in a second-degree case. The client was convicted after a trial; however, the verdict and the sentence were vacated after an appeal and the case is being retried.

A case involving criminal possession of a gun was eventually resolved with a dismissal by the Queens District Attorney’s office.

OVERVIEW OF GUNS AND WEAPONS CHARGES

Guns and weapons charges are just that, illegal actions that involve guns and weapons. The laws in New York are extremely strict. You could be in the car with your family with your empty gun secured in its case, but if the bullets are close to the gun so that it can be quickly and easily loaded, you could face possession of a loaded weapon charge anyway. That bumps a misdemeanor up to a felony. It happens just that fast and it happens every day.

Federal gun charges are serious and may involve the use, sale, possession, or distribution of firearms as well as other weapons. There are several federal gun laws:

Cases can involve serious crimes like armed robbery, or nonviolent issues such as a convicted felon who is in possession of a gun. Federal law prohibits people from producing, importing, or conducting transactions in firearms across state lines without a special license.

The preservation of firearm serial numbers also falls under federal purview. It is a violation of federal law for anyone to knowingly transport, deliver, or accept a firearm with a serial number that has been removed, altered, destroyed, or changed. It is also illegal under federal law to purchase a firearm for or on behalf of another person – even a family member or spouse.

The gun laws in New York regulate the use, possession, and sale of both firearms and ammunition. While state law does not require a person to have a license to possess or own long guns like rifles, they must have a permit to own a pistol. The state has also placed a ban on all assault weapons although those owned prior to the ban are exempt.

New York City, on the other hand, requires permits for both pistols and long guns. This can cause a great deal of confusion if you aren’t mindful of the laws in your area.

A person who possesses a firearm illegally can be charged with the Class E Felony, Criminal Possession of a Firearm. The charge can jump to Criminal Possession of a Weapon in the Third Degree, though, if there has been any attempt to hide or alter the serial number, such as filing, defacing, or scratching. The latter can put you in prison for as many as seven years.

Possession of three or more firearms in New York can get you a charge of Criminal Possession of a Weapon in the Third Degree. Prosecutors in the New York courts are well acquainted with the nuances of the state’s gun laws. If you already have a criminal history, your charges are already bumped up to the maximum. You need an attorney who can match wits.

The NY SAFE Act is New York’s gun regulation law, passed in January 2013. This law was in response to several recent high-profile shootings, including the Sandy Hook Elementary School shooting in Newton, Connecticut.

Under the Act, there are several provisions:

TYPES OF GUNS AND WEAPONS CHARGES

Some of the charges under Article 265 include:

Charges under Article 400 relate to licensing issues, such as ammunition sales, statewide record and license database, licensing to carry, repair, possess, and dispose of firearms, and mandatory reporting of lost or stolen firearms.

Federal penalties for guns and weapons charges are harsh. A person who alters a firearm that is semi-automatic, making it fully automatic, can get a prison term of 10 years. Possession of the firearm is also 10 years, and anyone who sells it can get 10 years. A convicted felon who possesses any type of firearm can get a 10-year prison sentence.

A person who is charged with using a firearm in a drug trafficking or violent crime stands to get a 5-year mandatory prison sentence if convicted. If they are convicted a second time they are looking at a mandatory 20-year prison sentence, or life imprisonment without parole if the gun had a silencer or was a machine gun.

Shortening the barrel of your rifle below 16 inches, or your shotgun to less than 18 inches carries a 10-year prison sentence. Transporting a gun, knowing that the recipient intends to commit a felony, could get you 10 years in prison.

PENALTIES FOR GUNS AND WEAPONS CHARGES IN NEW YORK

New York penalizes more violent gun crimes according to the sentencing guidelines. The law has special provisions for certain offenses that involve firearms. For instance, a violation of a Class D Violent Felony has a minimum, normal sentence of at least two years. When you add in a third-degree weapon charge that sentence is increased to 3½ years with a maximum sentence of 7 years. Aggravated weapons possession, a Class C Violent Felony, could get you 4 years, although that is the minimum. A typical term is at least 3 ½ years and a max sentence of 15 years.

Even misdemeanors can carry jail time if you aren’t careful. Possession in the fourth degree is classified as a misdemeanor, but you could get a year in jail as well as expensive fines, not to mention the criminal record that will follow you forever. A charge of weapons possession on school grounds is a Class E non-violent felony and carries a sentence of as much as 4 years in prison.

Each case is different, but there are some elements that don’t change much. There are a wide variety of circumstances that would guide your defense. The most straightforward approach, though is a good place to start. Your gun license lawyer may say that the weapon was not illegal according to state law. It can also be argued that you did not have access to or possess the weapon if you are charged with illegal possession.

If you’ve been charged with displaying or using a weapon illegally, your gun rights attorney may argue that you used the weapon or showed it in self-defense. He may even go so far as to show that it was not a weapon. If you are charged with a crime and a weapons charge is compounding the charge, your attorney may diminish or disprove the weapon charge.

In some cases, lawyers for gun charges may move to suppress evidence if law enforcement obtained the firearm through an unlawful search. This is especially true if the weapon was in your home when it was seized. If the search that resulted in the weapon being seized was unreasonable, you cannot be charged.

Knowledge and possession are two more areas that can be difficult for the prosecution to prove. For instance, if you were a passenger in a car, you may not have had knowledge of a gun in the car’s console. Therefore, you could not have possessed it. A good defense attorney who understands gun laws can help you.

If you are facing guns or weapons charges, don’t wait to see what happens. As soon as you are arrested, or if you think you are under investigation, you need to call The Litvak Law Firm at (718) 989-2908. The initial phone consultation with a gun law lawyer is free. Igor Litvak is an experienced, aggressive criminal defense attorney and he’s ready to help you. You need representation from the start and Mr. Litvak has the experience and knowledge to help you through the process and ensure that your rights are protected. Call today, you can’t afford to wait and hope for the best.