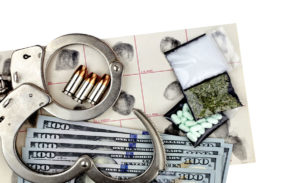 In recent years, elected officials and law enforcement have shone a probing light on drug crimes in the United States. While drugs are often implicated in many crimes, there are four “drug crimes” that are recognized in the US: Possession, Use, Manufacture, and Distribution & Trafficking. They can include illegal drugs like cocaine and heroin, as well as prescription drugs like Oxycontin and Fentanyl. The recent legalization of marijuana in some states often adds confusion to the mix as people try to figure out the new laws for medical and recreational use and distribution.

If you have been charged with a drug crime, it can be detrimental to your personal and professional life. You can find yourself unable to get a job or even rent an apartment. The social stigma that you will carry with you from a single drug conviction can be devastating. You need an experienced drug crime defense lawyer on your side to wade through the complex drug laws and work in your best interest. You may be able to avoid jail time and other punishment, but you will need a criminal drug lawyer who knows the ropes and knows how to get things done. You need Igor Litvak of The Litvak Law Firm.

EXPERIENCE AND SKILL IN REPRESENTING CLIENTS CHARGED WITH DRUG OFFENSES

An Estonian national Jevgeni Bokov was arrested and extradited from Estonia on the charges of manufacturing and importing Fentanyl into the United States. Mr. Bokov was facing a recommended sentence of 40 years, and a mandatory minimum sentence of 10 years, however, after receiving and reviewing all the evidence against Mr. Bokov, Defense was able to negotiate a plea to Money Laundering charge. Mr. Bokov was later sentenced to 33 months.

Major federal drug distribution case involving international ties and large amounts of cocaine which was allegedly distributed throughout the Northeast of the United States.

State felony marijuana distribution and trafficking case which was resolved with a non-criminal disposition, resulting in no criminal record for the client.

In the US, drugs can be linked to crimes in a number of ways, finding their way in to other criminal activity as either an impetus or as a peripheral activity that may or may not be a leading factor. There are many issues that can certainly muddy the waters where drug crimes are concerned. For instance, not all drug crimes involved illegal drugs. Prescription drugs are a major problem in our society today, to the extent that our government has declared opioid use and abuse an epidemic. At some point, these drugs may have been legal, but the illegal activity that surrounds them turns them into illegal substances.

The recent movement to legalize marijuana has also presented some challenges. There are some states that legalized it for medicinal use and others that have made it legal for recreational use. The amount of drugs on a person also play a part in whether it is a crime or how serious a crime it is. The laws are often confusing so legal representation by a skilled drug defense lawyer is an absolute must if you want the best outcome possible.

Drug offenses can be brought in either federal or state court. This means that even if you are arrested by local police, you could still find yourself in federal court. There are some things that can put you on the fast track to a federal drug offense though. For instance, if you are arrested by a federal officer, that almost automatically makes your case federal. It usually doesn’t matter if you were arrested for smoking pot on the federal ground (such as a national park), or if a DEA officer arrested you during a drug bust.

Many of the federal drug charges are related to drug trafficking, but there is any number of other reasons that a drug charge could wind up being federal – and the minimum penalties are extremely harsh for even seemingly minor drug crimes. However, a person who has a federal drug charge may provide information on other drug crimes in a plea deal in order to try to get leniency in their own sentence.

A federal charge often means federal prison and a federal sentence can be quite severe. When the federal drug laws were first drafted in 1986, the harsh sentences were intended to punish the “big time” drug traffickers. However, interpretations of the law have spiraled to label just about anyone who is arrested for a drug crime as a trafficker. Many people believe that this was not the intent of original federal drug laws.

New York has some of the toughest drug laws in the country. It has laws that govern the drugs themselves, like cocaine, but also compounds that are used to manufacture drugs, like pseudoephedrine. The law also separates offenses related to marijuana from offenses related to controlled substances. This can make the laws even more difficult for the layperson to understand, especially when separating state drug crimes from federal crimes which may overlap or even contradict in some areas.

The state’s voluminous drug laws make drug charges extremely complex and difficult for an inexperienced person to navigate. For instance, in the case of drug possession, New York law has six different classifications for felonies under that charge. There are five classifications for the sale of a controlled substance. What’s more, a person who has drug charges may not have had physical possession or completed delivery of the substance, yet the charges stick. It is not a simple process so if you have drug charges against you, the first thing you need to do is get an experienced attorney.

Laws can vary widely from state to state in many areas, but drug laws seem to present some of the widest, most complex margins. In the United States, power is given to the states and their government to create their own laws for most things with minimal intervention from the federal government. From time to time, this can result in a contradiction between certain state and federal laws. What may be legal under state law is illegal under federal law.

Federal law classifies cannabis, or marijuana, as a Schedule I drug. Substances under this classification have no accepted medical use and are considered to have a very high potential for abuse. Other Schedule I drugs include LSD, peyote, heroin, methaqualone, and ecstasy. This law, the Controlled Substances Act (CSA) (21 U.S.C. § 811) fails to establish a line between recreational and medical use of cannabis. Instead, it treats cannabis like any other controlled substance.

This means that under federal law a doctor cannot legally prescribe cannabis for medical use. However, the First Amendment does allow them to “recommend” it. The person who is caught using the drug can face federal charges though because it is a federal crime.

Many states have railed back against the federal laws by making marijuana legal for medical use. Several states have even passed laws making recreational marijuana use legal. It is the responsibility of local law enforcement to uphold state law, not necessarily federal, which can somewhat keep the situation within the state’s purview.

There is a great deal of controversy surrounding the legalization of marijuana. States that have legalized it for medicinal or even recreational use do so in direct violation of federal law. This can make a defense of a drug crime that involves marijuana very difficult. As the states continue to struggle with the federal government for power, to maintain and uphold federalism, many people still hang in the balance. This underscores the imminent need for not only clearer laws surrounding this issue but also a clearer line that defines states’ rights. It is also a very compelling reason for you to obtain experienced counsel from knowledgeable drug case lawyers, should you be charged with a drug crime.

There are several types of drug charges and within each one there are varying degrees, often depending on the amount of the substance involved.

The United States Sentencing Commission has created a table that provides sentencing guidelines for federal drug crimes. It takes into account the defendant’s criminal history as well as the offense itself. Using that criteria the defendant is placed into one of the following zones:

There are 43 offense levels with the more serious offenses placed at the higher end. There is a base level assigned to each of the hundreds of drug crimes. Once the baseline is established, other factors are considered to determine the offense level.

In New York, the sale of a controlled substance is a felony. Drug crimes penalties can range from 1 year to life imprisonment. A first-time offender who is charged with a fifth-degree sale could get between 1 to 2.5 years. Non-major drug traffickers get a minimum of 8 years and up to 20 years with five years of post-release supervision. The minimum prison sentence for trafficking Schedule I or Schedule II drugs is 10 years. Second felony drug offenders get a minimum of 12 years, up to 20 years, and major drug traffickers get a minimum of 15 years with the possibility of life imprisonment.

In addition to prison terms, felony drug offenders can also be required to pay fines. These fines start at $5,000. If the defendant gained from the sale of the drugs, then Courts can impose fines that are double that gain. A major drug trafficker or a person who is charged with the first-degree sale of a controlled substance could be required to pay the maximum drug fine of $100,000.

In New York, the prosecution in a drug case carries the burden of proof to show beyond a reasonable doubt that:

Under New York law, possession does not just mean the person had physical possession. There is also “constructive” possession, meaning that the person charged had control over where the drugs were found, whether it is in a place such as their car, or on a person.

A good criminal drug lawyer will attack one or several of these areas to show that the person is not guilty of the crime or that the arrest was illegal. Skilled Brooklyn drug crime lawyers know what qualifies as evidence and what does not in regard to the charges against you. Illegal search and seizure is a common defense in drug crimes. It essentially attacks the evidence or how the evidence was obtained. Each case is different, so each defense is different, but an experienced drug crime defense lawyer will ensure that your rights are protected and that you receive a fair trial.

If you have been charged with a drug crime, you need a drug crime attorney on your side who has the experience and education to make sure your rights are protected. Call Igor Litvak of The Litvak Law Firm. He has handled drug cases at both the state and federal levels and will work hard for you to ensure that you have a fair trial and have the best outcome possible. Whether you are under investigation, facing trial for drug charges, or considering an appeal, Mr. Litvak can help. Don’t try to handle a drug charge on your own, get a criminal drug lawyer who will go to bat for you and look out for your best interest. Call (718) 989-2908 today, your initial phone consultation is free. Don’t wait to see what happens, get the representation that you deserve, and protect your rights.