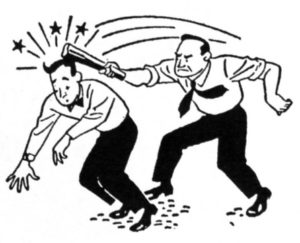 An assault charge can encompass several factors and occur in varying degrees. It can be committed with a weapon or without, and there are even several sections within the law that cover assault with a vehicle. It often is not as straightforward as other crimes, like theft or murder. In fact, it is not much of a stretch of the imagination to say that you may not even think you are committing assault until it is too late. It is this ambiguity and complexity of the law that makes having an experienced Brooklyn assault lawyer on your side an absolute necessity.

Just like other convictions, an assault charge can follow you for the rest of your life. Once convicted, you will always bear the stigma of a person who is violent, harmful, and unable to control their anger. While it is best to avoid even the appearance of wrongdoing, sometimes it is unavoidable. You may be in the wrong place at the wrong time, you may be negligent, or you may have a momentary lapse in judgement as your emotions take over. Whatever the case, those few moments can lead to a lifelong mark on your record. It could keep you from getting a job, bar you from renting an apartment, and prevent you from certain types of activities that require a background check. It could also lead to an order of protection being taken out against you.

You don’t want an assault conviction following you for the rest of your life. Can you really afford that? You need an assault and battery defense lawyer on your side, one who is experienced, knowledgeable, and cares about your future. You need assault injury attorney Igor Litvak of The Litvak Law Firm.

EXPERIENCE AND SKILL IN REPRESENTING CLIENTS CHARGED WITH ASSAULT OFFENSES

Mr. Litvak has a proven and impressive track record of defending clients who have been charged with assault. It is this experience, coupled with his genuine concern for his clients, that makes him a formidable opponent in the courtroom. Some of his more notable assault cases include:

Violent felony assault, menacing and harassment case involving a weapon, eventually all of the charges were dismissed by the Court.

Violent felony assault and harassment case involving a weapon, case was resolved with a plea to a misdemeanor with community service and probation only.

Assault and endangering the welfare of a child case which was resolved with a non-criminal disposition, resulting in no criminal record for the client.

Assault, endangering welfare of a child, menacing and harassment case which was eventually dismissed by the Court.

Assault, obstruction of breathing, endangering welfare of a child and harassment case which was eventually dismissed by the Court.

Assault is a threat or attempt to inflict harm or any other offensive contact upon another person. It is often confused with battery, but they are distinctly different. In fact, assault and battery typically occur together since battery is the follow through of assault, meaning it is the act of inflicting harm or offensive contact.

Each state has its own definition and its own technical aspects of how that law defines assault, but the basic premise is always the same. It is also interesting to note that assault is not only a crime, but a tort as well, meaning that you could wind up in criminal court, civil court, or both.

Some types of assault become federal offenses when they are committed on United States property, such as in a federal government building, within a national park, on a U.S. ship, or at a federal prison. It also a federal offense to assault a U.S. federal officer or employee. People who commit these specific assaults are very likely to find themselves standing before a federal judge.

Under New York law, there are several clearly defined types of assault. Prosecutors will review several different factors when determining the charges that will apply. The presence of a weapon used during the crime, motivation for the attack, and the extent or severity of the injury are all taken into account. This usually results in the offender being charged with several crimes including harassment, menacing, and attempted assault. While these are often considered to be secondary or “lesser” charges that do not have an impact on the actual term of your sentence, they do help to secure the conviction, especially if the prosecution is having trouble making the single assault charge stick.

Under New York Penal Law § 120.00 there are a number of activities that fall under the larger umbrella term of assault. The classification of felony or misdemeanor for each offense depends on the degree and type of crime. Some of the more common types of assault include:

Hazing, stalking, and menacing fall under the assault laws and definitions in New York, as does promoting a suicide attempt. Some of these assault laws can be quite murky so having an experienced criminal defense attorney to guide you through the process is absolutely essential.

Any federal assault charge has the potential to lead to imprisonment and most incur a fine. You could spend up to six months in prison for simple assault, but if the victim is younger than 16 years old, the max sentence is increased to a full 12 months. An assault that causes extreme physical pain, long term impairment or loss of a body part, substantial risk of death, obvious and continued disfigurement, or other serious injury, can result in a prison sentence of up to 10 years.

Other federal assault penalties include:

In New York, there are several factors that go into determining the punishment for assault charges. There are several outcomes of these cases: jail time, probation, fine, restitution, and order of protection. Often, the result is a combination of these penalties. For instance, a person may get jail time, have to pay a fine, and have an order of protection taken out against them.

Assault in the third degree, a Class A misdemeanor, can include up to a year in jail, but first-time offenders are rarely put behind bars. However, the judge could order probation. Other offenses have specific classifications:

Some assault offenders can face up to 25 years in prison or more, along with a $5,000 fine. Even the more minor offences may include jail time of up to a year and a fine of up to $1,000.

The defense attorney may try to plead down the charge so that instead of a felony, you are dealing with a misdemeanor. This depends on the severity of the case and many factors are taken into consideration when determining if this is the best course of action. Each case is different, so if you are facing assault charges, your attorney may choose this as a defense option.

There are several ways that defense attorneys will address assault charges. Typically, they will either cite lack of intent on the offender’s part, or lack of injury on the victim’s part. Consent is another common assault defense, although it cannot be used for third degree assault with intent to injure or second-degree assault with a deadly weapon. A very common defense, and one that is probably very well known, is justification. The offender may say that he or she acted in self-defense or was defending someone else. However, if the offender initiated the encounter or was the initial aggressor, then that defense will likely not apply.

If you have been charged with assault, don’t let anyone tell you it isn’t a significant charge; it is. An assault charge can be very serious and can cost you dearly. You need an assault injury lawyer on your side who is acting in your best interest and protecting your rights. Mr. Litvak has the education and experience to handle your case and provide you with the best outcome possible. Don’t leave your future to chance; that is way too risky.

Don’t just choose any assault law firm. Call The Litvak Law Firm at (718) 929-2908 today and get the representation that you need. Your initial phone consultation is free. Don’t you owe it to yourself to have some peace of mind while you are going through this difficult time? You will rest better knowing that you have an aggressive accomplished assault and battery lawyer fighting for you and working hard to ensure that you get a fair trial. Call today and get the representation that you need.